TARANIS RESOURCES INC.
A District Lost in Time - Until Now!
​The Silver Cup Mining District is located east of Upper Arrow Lake, in an area of very rugged terrain. The District is a cluster of deposits and mineral occurrences that is approximately 40 miles in length, and starts southeast of Revelstoke on the Trans-Canada Highway and extends to the southeast end of Trout Lake. The District consists of three mineral belts. The largest, and most important is the Central Mineral Belt, and this includes a number of old prospects and mines, the largest being the Meridian/Eva, True Fissure (Thor), Silver Cup and Triune mines.  Both the Silver Cup and Triune saw significant production history, and the old workings that constitute the Thor project (Blue Bell, True Fissure, St. Elmo, Broadview and Great Northern) saw extensive Underground exploration, but only minimal mining. 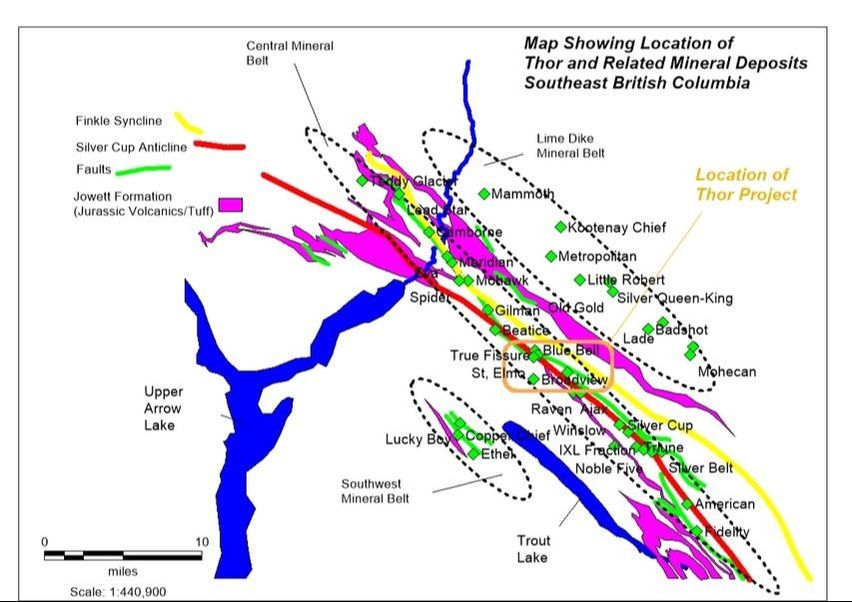 From a comparative perspective, the Silver Cup and Thor deposits are nearly identical since they both occur on the east flank of major anticlines, and have nearly identical mineralogy, rock types and ore tenors. Taranis geologists speculate that both may have been interconnected at one time, and may have been parts of the same mineral deposit that have been folded and faulted (Sambo Property).